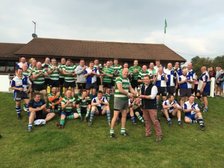 The game was played with 100% commitment from both sides, which was always going to be the case with it being a League fixture as well as the inaugural Foxy Cup, to commemorate Nigel Fox (ex-Saints player who also played for Brackley and coach at Buckingham), who passed away 3 years ago. It was very pleasing to get the victory under our belt. Brackley will be trying to get the Foxy Cup back each year but we’ll do everything we can to keep it behind the bar for some years to come.

The game seems to have created a good buzz in the older playing generation and we have plenty of names coming forward for more of the same; those that played are up for it again when we have our next League game, and those that missed it are now sorry and are begging to play in the next fixture. This is a nice problem for me to have, and long may it continue.