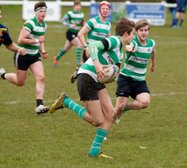 Dominance in the set piece, aggressive defence and flair in the backs saw Buckingham through to their second Final of the season

Looking for a repeat of their win in the League, Buckingham attacked from the start and pinned Old Scouts in their own half. With Scouts reduced to kicking possession in an attempt to break out. Hamish, moved to 15, was solid under the high ball and it was 12 minutes before Scouts managed to break out wide into the Buckingham half. Stealing ball from the Scouts lineout, Mike Taylor broke through the centre and Olly Bradford on his shoulder took the ball back into the Scouts 22. With a series of forwards drives and lineouts failing to convert pressure to points, it took a decisive break from Max to get through the Scouts defence, dummy the full back and touch down for the first Buckingham try, duly converted by Max himself.

Not straight by Scouts at the lineout gave Buckingham possession from the scrum and Thom Foster finding Sulli on his inside shoulder, Sulli's powerful run took Buckingham back to within 10 metres of the Scouts line. At the next scrum, Ollie Toone broke for the back and as Scouts infringed, Buckingham could kick to touch for a lineout 5 metres out. Unstoppable from this distance all season, Euan claimed Buckingham’s second from the driving maul for a 12-0 lead.

Scouts were down but not out and helped in their next attack by infringements at the breakdown by Buckingham, as Buckingham came up quickly in defence, space appeared out wide and a diagonal kick found their pacey winger to pull a try back for the home side. The final play of the half though was to be Buckingham’s and a simple backs move saw Max wrap around and take his second try and second conversion to make it 19-5 to Buckingham as the whistle went.

The second half started much as the first finished, with Buckingham in the Scouts half and getting over the gain line, this time with a deep drive from Matt . Showing how simple rugby can be, quick ball down the line gave Sulli the run in out wide and another Nagy conversion made it 26-5 fairly quickly. Scouts still found themselves reduced to kicking away possession in an attempt to get out of their own half and as the Buckingham backs opened up, Olly Bradford on the wing closed to 10 metres out, Jethro drove hard towards the line and Will crossed the line but was adjudged held up. As Scouts kicked out again, Elliot ran back with one of his trademark mazy runs before the ball as once more released down the back line, this time for Mike Taylor to take the 5 points, preceding a fourth Nagy conversion and a 33-5 scoreline.

The next try went to replacement No 8, Harry Lewis, off the back of the strong Buckingham scrum which drove Scouts off their own ball for the second time that half. As Buckingham finished strongly, a moment of opportunism by the Scouts fly half saw him intercept the pass from 10 to 12 to run in and bring their score into double figures. Looking to finish stronger than they started, Buckingham stormed straight back as Scouts collected the kick off on the 10 metres only to find their player collected by Gibbo and driven back 20 metres into their own 22 (another opponent mentally scarred for life). Accidental offside gave Scouts an opportunity to get away from their line but once again Buckingham drove them off their own put in to keep them pinned down and first Joe and then Arthur came close to scoring. A yellow card for Scouts following another infringement on their line gave Buckingham a final chance to add more points but an adventurous play by the backs didn’t quite come off and the game finished with a convincing 38-10 win, which failed to do justice to how tough a game it had been.

A slow start saw a combination of trying too hard to finish at the first attempt and lack of discipline combine to keep the score nil-nil for too long in the first half. Once this settled down, unlike previous matches Buckingham didn't shut off when well ahead and the replacements saw Buckingham finish stronger than they started as shown by the three steals on Scouts put in. A tougher game than the scoreline suggests, credit to Scouts for battling to the very last second despite being out of it.