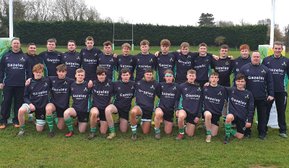 Heavy ground conditions, only 6 backs and Mike's 18th the night before meant tough going at Wellingborough but Buckingham clung on at the end for a win

Tries by Will and Craig (well technically a penalty try was given when the punches started swinging but Craig was over the line by then so we'll give him the credit) and two conversions by Will kept Buckingham in the Referees Cup despite the ambition and pressure from Wellingborough.

Conditions were never going to be conducive to running rugby given the cloggy surface after a combination of rain and frost. For the first 15, Buckingham tried to run it though and kept Wellingborough pinned in their own half. The scrum was on form and on top of 'boro, with the two Joe's getting the better of the opposition front row, however the lineout faltered with the first 2 being called not straight. When Wellingborough did break out their forwards tried to drive through Buckingham without success and the fierce defence in the backs stopped any ambitions they may have had. Back in the 'boro half, another in a series of penalties to Buckingham was quickly taken by Will and with support from Craig play was taken to within 10m of the line. Although Wellingborough turned the ball over in the ensuing forward drives, their kick out of defence found Archie, who was having a storming game at 15. Breaking the Wellingborough line, he had Will on his shoulder to take the pass and score the first points out wide. With heavy ground and a muddy ball the kick from 5m in from touch would have stumped many a kicker, but Will made it superbly.

It looked as though Buckingham were starting to fire as D-T took the kick off and ran strongly to put Buckingham on the front foot. Will's chip was secured by Mike and another quick kick chased by Tom T and D-T put 'boro under intense pressure well inside their 22. Unfortunately what looked like a certain try wasn't to be in the muddy conditions as an attempted secure and slide turned into a knock on and Wellingborough were able to keep it to 0-7 at half time.

The second half started with more pressure from Buckingham and a 22m drop by Wellingborough going straight out gave a great attacking platform. A slippy ball and handling errors let Wellingborough off again and although they kept clearing to half way, Will was able to kick them back into their 22 as they coughed up penalties. If the lineout had been functioning then the story could have been very different but Buckingham never had a period of secure possession from this set piece. A lineout steal by Wellingborough launched an attack that was stopped as before in mid-field, but a grubber through was collected and despite despairing tackle attempts gave Wellingborough their first points but no conversion.

From the kick off Ryan stole the ball at the breakdown, not for the first or last time, and Buckingham camped yet again in the Wellingborough half. With the scrum still strong, this gave Buckingham opportunities and first Mike, then Craig, then Ed B then Alex drove into the Wellingborough defence. Something had to give and eventually it did and Craig stormed through for Buckingham's second, converted by Will for a 5-14 lead.

Wellingborough were not going to fold however and came out of the blocks firing. Buckingham's defence remained strong. A penalty for offside though found the Buckingham defence slow to reorganise and with a big overlap a chip to the Wellingborough centres brought them equal on tried but 10-14 behind following another kicking failure. The final few minutes had first Buckingham breaking through from another strong run by Mike with Alex, having the game of his season and picking up man of the match, in support and back into the 'boro half. Wellingborough's attempts to kick to relieve pressure were met by Archie and returned with interest but a break around the Buckingham defence needed a fantastic cover tackle from Tom T to save the game for Buckingham.

A tight, tough game in heavy conditions and great character shown by both teams. The after effects of Mike's party showed through in slow work from many, a drop from the usual Buckingham fitness levels and a quiet game for some that last weekend had been on fire. Defence was solid and without shipping penalties as the penalty count went very much in Buckingham's favour this weekend. Thanks again to forwards for stepping into the back line to cover for injuries and absence. Finally, for 70 minutes Alex Maclellan showed the way as he tackled, drove, turned over ball, was there in support and generally did everything that could be asked of him and a lot of what should have been asked of others - a standout performance.