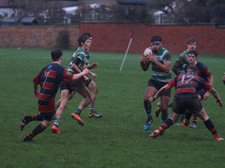 In gloomy conditions, turning to rain, a rusty Buckingham took their chances to run out convincing winners

After an extended 3 week Christmas break due to cancelled fixtures, Buckingham looked a little rusty, but as the weather worsened the team dug in and with solid defence and a strong set piece they took most of their chances.

The first half was almost evenly split between a great Buckingham start and a determined ONs fight back. Most of the first quarter saw Buckingham attacking with good blind side breaks and driving mauls from the lineouts which resulted from ON infringements. Initially the pressure didn't yield points as firstly the final pass to Elliot was adjudged forward and then a rolling maul saw Euan over the line but held up as bodies piled in from all angles. Inevitably a score had to come though and eventually, having driven up the centre, the ball was swung back to the left for Hamish to score on the outside - is there a beter finisher in the League this season? Thom then slotted a difficult kick with consummate ease to make it 0-7. ONs response was to tuck the ball up the jumpers of the forwards and use a big centre as a battering ram, making hard yards down the slope and asking Buckingham to throw everything into their defence. With Thom leading the way with offensive tackling and a crucial take against the head by Archie, the defence held firm and the score stayed as it was to half time.

The second half saw Buckingham with the slope and what wind there was attacking afresh. Having been stopped from the lineout, the forwards continued to batter and a series of drives from a scrum 10 metres out saw Michael finally drive over for a try (becoming a bit of a habit now) : 0-12 and edging away inch by inch. ONs not to be outdone came forward again and a series of penalties saw Buckingham defending their own line once more from a lineout maul. Superb work by Euan and Jethro saw them disrupt the ON maul, get through the centre, latch onto the ball carrier and drive him back out to the 22.

The weeks off were telling as Buckingham played far too laterally and spent too much time behind the gain line with only Sulli really providing impetus in the back line. However, a take from an ON lineout saw things start to spark again as Harry L charged through to make 15 metres, then Craig's burst from the ensuing scrum saw Joe appear to take quick recycled ball on to the ON 5 metre line. Held out and hammering on the door, a final darting attack by Max saw him over for Buckingham's third and at 0-17 with no more than 20 to go it was beginning to look secure. Not totally though as ONs fought back again, to be kept out by dogged defence and the perils of a wet ball and muddy pitch.

A hard game in poor conditions with a team that looked like it had been out of action for 3 weeks and a determined opposition. A good one to win and credit in particular to the Buckingham defence and the team commitment - keeping a clean sheet against ONs is never an easy task and once again the whole squad played their part