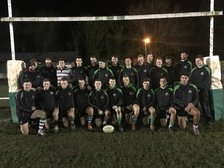 As the wind picked up and the rain got heavier, in a very competitive game the Young Bucks outscored Olney 5 tries to 2 for a second win

With the wind behind them, the Young Bucks kicked off and kicked dead. Starting strongly they took the Olney scrum, earned a penalty which was kicked to 10m out and from the subsequent maul Harry Scarr took try number 1. Weathering the first Olney attacks, Glendinning took ball from them at the lineout and a break by Kinman took the Young Bucks back in to the Olney half. Sweet backs play saw Craig Coxon hit a diagonal and only some poor handling prevented a further score. Olney were stuck in their 22 though and Toone won a penalty at the breakdown that saw another lineout near the Olney line produce Scarr's second. A great kick from Ed Kinman made it 0-12 with 10 minutes gone.

As far as scores go, that was pretty much it for the rest of the first half - not for want of trying on both sides. The Bucks came close with breaks from Tom Taylor, Callum Davey-Turner and Kinman, but to no avail. Under pressure in the scrum, Bucks held their own in the lineout and at the breakdown as Olney punched round the fringes, with Wiggy supplying good quick ball when the forwards turned Olney over. For their part Olney threatened on a number of occasions and at one point only the discovery that prop Dumbarton can shift kept Olney out as he dashed back to recover a kick through and then hold his ground long enough for support to get there. Only a final kick by Kinman moved the score on to 0-15 as the half time whistle blew.

Now playing into a rising wind, Bucks took the first lineout and attacked, Kinman feeding Taylor on another break with Petrie's twinkling feet taking him well into the Olney half and support from Gibbo on the charge bringing them into the 22. The next attack saw ball swiftly down the backline and after an absence of 3 years, Will Hughes slicing through the final defence. With another superb Kinman kick into the wind it was 0-22.

Olney's pressure finally paid off as they got their first points following a Bucks offside near their own line and put 5 on the board. Escaping from the next Bucks attack with a long kick, Olney found themselves facing a Petrie showing no signs of University excesses having slowed him down as he ran back the ball, feeding inside to Gurney to surge on. Harry Lewis picked one of his trademark lines, which Olney will remember from Oceanic Trophy days, to break the next defence and, as the forwards recycled, a pass out of the back door to Toone put him over for a 5-27 scoreline.

Again Olney came back at the Young Bucks and 10-27 with 15 to go kept them in the match. From the kick off though Bucks put the pressure back on in the Olney 22. A lineout win was followed by a lovely kick through by Gully and footballing skills by Hughes left him a lot still to do but he collected his grubber and shot over the line to make it 10-32 and put it out of reach for Olney. Someone must have forgotten to tell Olney though as they threw everything at the Bucks defence for the last 5 showing real grit, but to no avail.

An excellent, competitive match and great to see so many ex-U18s back at their clubs and playing together again. Credit also to the current U18s who stepped up a level to play and played well - Nick Sumner, Callum Davey-Turner, Max Boothby, Tom Taylor and Niall London. Thanks to Olney for hosting and we look forward to repeating the fixture next year.