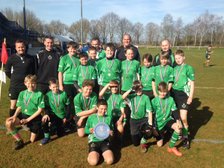 An early start for 34 boys and parents to compete in the Banbury Festival. With strength in depth the boys were positioned
in two mixed teams ( following the cancellation of the 'B' competition ) against all 'A' sides from 7 other clubs.

After a good warm up the parents soon managed to get the gazebo up in one go! Meanwhile the coaches put the boys
through their warm up drills; 10am on the clock, time to play rugby.

1st up for the Grizzlies in Group A was Old Scouts a tough opening game with Buckingham starting slowly and missing tackles OS open the scoring. OS continued to dominate territory taking an interception, to make it 2-0 to OS at halftime. The second half started with further pressure from OS resulting in a third try, which finally sparked some life into Buckingham who started to play rugby in the OS half which led to Buckingham score from a rampaging Willoughby to make the final score 3-1 to a strong OS team. But Buckingham knowing they can play much better.

The next game was against Banbury which saw much better intensity leading to an early score from Isaac MB, which he soon followed up with a second following good passing through the line to make it 2-0. Great interplay between backs and forwards sees Charlie D go over for 3-0 at halftime. At which point a couple of gazebos took to the air in a bit of whirlwind as perhaps a
fly past to recognise the much improved performance by the boys. A final try from Jack makes the final score 4-0 and a much better all round game from Buckingham.

The third game was against new opposition Worcester, who proved good opponents. Heads up rugby from the boys sees the game being played in the Worcester half with a number of boys going close, before the deadlock was finally broken by a good breakout by Charlie D and Josh putting Willoughby over to secure a very good win 1-0 to Buckingham.

Fourth up were Amersham & Chilternm a notoriously tough opponent. Buckingham continued the intensity that they had
built in the previous two fixtures dominating the game, with the pressure rewarded by another battling drive for the line from Willoughby to open the scoring 1-0 Buckingham. Completing well in the forwards and back line a victory was on the cards until the final play of the game when A and C equalised from a charged down kick to make the final score 1-1.

Well played by all the boys and coaches, finishing 3rd in their group winning 2 drawing 1 and loosing 1 all against A sides.

In Group B 1st up for the Polars was Shipston a team we have not played before with Buckingham dominating throughout with good play across forwards and backs with Joe G scoring following his own kick. To secure an opening Buckingham win 1-0.

The next game was against Long Buckby which was again dominated by Buckingham was won through two more tries from Joe. A game
full of highlights with great running and competing from all with special mention to Ted and Isaac F for their great commitment and powerful running and tackling to secure a 2-0 win to Buckingham.

The third game was against Banbury with the boys showing good intensity from the start with more strong running from Isaac F and Jacob freeing up George to make a long pass to release Joe to make it 1-0 at halftime.

The second half kicked off with Banbury equalising through a controversial score and with the boys still shell shocked
by the decision they went further behind 2-1. Despite Buckingham pressure they were unable to reply, with the game lost 2-1.

Fourth and final pool game was against Gosford, a team the boys know well. Buckingham playing all the rugby to
win 4-0, through tries from George (2) Ted and Joe to win their final game 4-0.

Winning 3 and loosing 1 (again against A opposition) the boys finished 2nd in their group to face A and C in the cup semi final.

This great achievement was a game too far for the boys. Starting slowly the Polars were outplayed in the first half conceding 3 quick tries and then a fourth straight from the 2nd half kick off to make it a 4-0 well deserved win by A and C.

With their tournament over the boys should be proud of themselves with everyone competing well in all games. A personal call out from me to Isaac F, Ted and Joe for some great back play and good tries.

Next up were the Grizzlies in the Plate semi-final vs Shipston. As expected this was a tough encounter with Alex B making the most of a breakaway going over to score to make it 1-0 to Buckingham at halftime. More pressure by the Buckingham defence led to a rushed kick by Shipston which Liam ran straight in to make it 2-0 and secure the win to put the boys in the final.

A sixth and final game for the boys in the Plate Final against Worcester was the repeat of an earlier pool game, with
again Buckingham winning the majority of the forward battles but we're not able to convert the possession to points, 0-0 at halftime.

The building nerves were soon put at ease with well taken tries from Isaac MB, Charlie D and a fantastic charging try to end the game from Willoughby for a great 3-0 win to secure silverware.

Like the Polars the Grizzlies should all be proud, four wins and a draw against the eventual cup winners (A&C). Some great team play throughout made the winning difference but also to call out Willoughby who dominated against all that the opposition could throw at him scoring some great tries.

Gazebo packed away, time to pick up medals and The Plate!