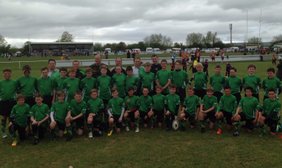 With cars laden down with kit, wet-wipes, army gear, BBQ stuff, and boys the Buckingham take-over of Pontins commenced on a chilly Friday evening. A couple of beers later the Cummins family led the way on the dance floor closely followed by Sally Phillips (yes both of them!). Meanwhile back on the A34 Andy and Nick were still enjoying the views of Oxfordshire from their car window as they were held up by an accident. A number of hours later they finally arrived to distribute team socks and t-shirts. And so all set, some headed off for a luxurious night’s sleep while others carried on in the bar hoping perhaps more alcohol would lead to a good night’s sleep.

The morning soon came round with a chorus from the native seagulls. Time for some breakfast and get in good position to battle for a place on the bus to the rugby venue. (Unfortunately I heard later on Saturday, that Kempy junior's boots were still going round on the bus!)

At the venue, the first task was the ceremonial erection of the gazebo. With months of training now paying off a record time was achieved - nice work! With parents now relaxed and taking their seats it was over to the coach's to get the boys ready for a tough day of rugby.

Pool A was the home of the Raiders, Pool B for the Marauders.

Raiders were up first against Cwmbran, loosing finalists and the only side to score a try against Buckingham last year, a very tough opening fixture.

Early pressure from Cwmbran was well defended with Kyle breaking through to release Max to make it 1-0 Buckingham. This was quickly followed by a kick through by Liam for Joe to gather and make it 2-0 at halftime.

Cwmbran came out the stronger side in the second half to get one back to leave a tense few final minutes. But the boys held out well with aggressive tackling and running from William W taking on half the Cwmbran team, typifying the intensity of the whole team. The boys held out to win 2-1.

The Marauders were up against Redingensian Rams at the same time. With Buckingham dominating the first half with sustained pressure forcing a line-out 5 metres out which Jack intercepted to go over to score the only try of the game. With Buckingham defending well, highlighted by a try saving tackle from Luke, to secure an opening victory.

The second game for the Marauders was Battersea Ironsides Centurions. With Kempy called on to arm wrestle for kick off which he won. Early exchanges were even but pressure from BIC lead to an opening try 0-1. Which was quickly followed by a second as Buckingham missed tackles to make it 0-2 at half-time.

Holding out for most of the second half BIC scored a third to secure a 3-0 win against Buckingham.

For the Raiders it was Old Rutlishians for their second game. Winning early possession the boys competed well but without penetrating the OR defence. Half-time 0-0. ORs came out fighting in the second half to open the scoring 0-1. Not to be defeated the boys came back well to make it an important 1-1 draw with a try from Isaac F.

Marauders were up next against Old Colfeians. Dominating the early exchanges Adam went close before setting the ball back for Rory to score. An interception from Charlie D offloading well, for a strong run to the line from Charlie F to make it 2-0 at half-time. More pressure from Buckingham sees Ted go over for 3-0 closely followed by a good run from George before Charlie D made it 4-0 Finally it was Jack’s turn to make the final score 5-0 Buckingham. Day one done won 2 lost 1.

The second Battersea Ironsides team - the Challengers, were the 3rd opponents for the Raiders. Good early exchanges with Joe making a try saving tackle before Willoughby went close from an interception. Good straight driving from BIC saw them open the scoring 0-1 and then they quickly make it 0-2 after the half time followed by a 3rd from a quick penalty. Some good pressure from Buckingham but unable to breakthrough sees a 3-0 loss to a very good side.

The day finished with a fourth game for the Raiders against Maidenhead
Cobras (a club we have 'history' with). Starting well a strong run from
Willoughby sets up Mathis for 1-0. Second half subs made their impact with William securing the scrum, from which Kyle breaks free to make the final score 2-0.

Firstly thanks to Lindsey for organising and catering for 350 people - it was a great event, although I suspect some might not remember everything of the evening! For those not quite sure what happened I would summarise as - chicken, soldiers, alcohol, socks, music, cake, expert bugle playing, man in a dress (you know who you are!) dodgy dancing and more chicken.

With hangovers treated it was once again time to head off for a second day of rugby, with good news that Kempy junior's boots had been found - funnily enough behind the sofa! (I can only assume the Kempy's luxury villa was so big they couldn't find them on Saturday).

First up were the Marauders in Pool B against Long Buckby. Good early play from Buckingham secures a penalty which Charlie F coverts for a first score which is soon followed by a second from Alex B. Halftime 2-0 Buckingham.
Continuing to dominate across forwards and backs sees four more tries from George, Luke, Tom P and Jack to make the final score 6-0.

For the Raiders it was Bromley up first. Dominating from the kick off with strong running and hard defence saw Willoughby bag two tries for a halftime 2-0 lead. An interception try from Liam secured a third before an 'angry' Isaac F charged through several tackles to make the final score 4-0 Buckingham.

Second game for the Marauders was Dartfordians. A close well fought first half ended 0-0. The second half saw Buckingham showing more intensity with well-deserved tries from Jack and George to secure a 2-1 victory.

Redingensian Titans were the second opposition of the day for the Raiders.

Strong running from Mathis, Willoughby and William set up Max for the opening try. A great give and go from Liam sets up Isaac F for 2-0, followed quickly by a mazy run from Isaac MB for a third, and again for a fourth. Halftime 4-0. From the restart Willoughby went over for 5-0 which proved to be the final score.

The final pool games left, it was the Marauders up first against Maidenhead Lions. Forced to pick only 10 players to match a reduced squad from Maidenhead the boys dominated territory but were unable to break through. Halftime 0-0. Adam made the crucial breakthrough to finish well in the corner 1-0 Buckingham, a second follows from George before conceding a late consolation from Maidenhead. Final score 2-1.

For the Raiders the final pool game was against a big Wells side. Daniel O dived over to open the scoring following good pressure from the boys. This proved to be the final score in a hard fraught victory.

There could only be one result, with both teams finishing second in their Pools - a repeat of last year’s Plate final – for overall 3rd and 4th place (out of 15 teams - with the team in 1st and 2nd having between 80 - 100 boys in their squad to pick from).

With the parents stepping in to take over the reins, the coach's stepped back to watch a thrilling final. Once again the boys could not be separated with tries from George for the Marauders and from Joe for the Raiders. Final score 1-1 and the trophies shared and yet more silverware for the clubhouse.

A big shout-out to Alex Blakeley who was recognised by the officials as the player of the U12 tournament. Well done Alex!

Final credits to all the players, coaches, manager and parents, with a big thank-you from all to Lindsey for organising us all on tour - in true military fashion.