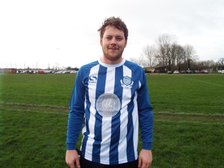 I am sure he will go on to do great things, seriously I do
Matthew Hawes

Following the departure of Ash Peacock over the weekend John Westcott has accepted the committees offer to take the role with immediate effect.

John has moved quickly to install Kieran Cozens and Julian Hawes as his loyal assistants in an attempt to turn around results. Secondly John has also moved quickly to sign a number of new players to boost the current squad with improvements where needed. With good links to the local Buckingham Star Six A Side League this provides John with a good pool of players he can hopefully attract.

On Ash Peacocks departure, Chairman Matt Hawes had this to say. 'I would like to publically share my sincere apprication for all the tireless hardwork that Ash has put into the club as a player in the clubs first season and then secondly as a manager stepping up to the plate in 2014. Since then Ash built up a squad that for two season running pushed for the Milton Keynes Sunday League Division One league title, missing out last season by only four points. Most noticeably he also got the club to it's first cup final entertaining a crowd with a thrilling game, all be it finishing runners up but an achievement that seemed so far away before he took on the team. Ash also runs Twyford's First Team and I wish him every success with them, I am sure he will go on to do great things, seriously I do. Thank You Ash.'