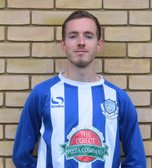 Bad day at the races for United

Oh sorry, you look like Phil from a distance. I thought you might want a lift home
Partially sighted man in car park

United Reserves went into Saturday's fixture against Silverstone off the back of two solid displays against Padbury and Deanshanger that ensured maximum points and a place in the upper half of the table were secured. The game against Silverstone represented a great opportunity for United to test their mettle against another team in the upper reaches of NBDFL;D2 table who could realistically win the league.

After a frantic start on Silverstone's notoriously boggy pitch, it was United that looked the better of the two teams, with Neil Hailstone and Tomas Goodgame stretching the Silverstone defence up top - and the forwards willingness to stretch the defence helped United take the ascendancy. Jack Stuchbury lobbed an early ball over the Silverstone defence, and Goodgame chaced towards the ball like a man possesed. Goodgame pace allowed him to nick the ball past the goalkeeper and slot into an empty net to give United an early lead. An unbelievably easy goal that gave United the advantage.

Silverstone began to play their way into the game, but United were holding firm with Silverstone yet to truly test Adam Bray in the United goal. Silverstone's pressure did force a corner though, and Stones number 4 floated a high curling ball towards the six yard box - both teams watched in amazement as the ball curled into the top corner of the goal.. and Silverstone had their equaliser.

Shortly afterwards, United made a routine clearance from a Silverstone attack, but the referee saw an altercation in the defence - Silverstone were awarded a penalty. The Silverstone forward couldn't believe his luck at the opportunity to give his team the lead and gleefully struck home - United were 2-1 down (harshly so) in what was a drab game, on a heavy pitch and the half-time whistle followed shortly afterward.

United knew what they had to do, and combined a change in formation with a positive attitude to achieve the result - but neither team could muster more than a hafl chance in a game with few chances. United pushed bodies forward in search of an equaliser throughout the half, but just couldn't breach the Silverstone defence - while at the other end Silverstone could have secured victory if their forwards had been able to time their runs better.

Silverstone did eventually breach the United defence to secure the victory, as their forward beared in on goal and slotted home after rounding the goalkeeper in what was one of the last meaningful actions of the game.

A dissapointing result for United in the end but one that brings positives - without the lapses in concentration and extraordinary mistakes the team know they could have have secured a draw, if not maximum points against a title contender. Food for thought.