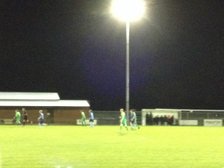 Canvey Island too strong for Ramblers in Essex Senior Cup

A brace from debutant Moses Ademola and a late strike from Spencer Bellotti secured Canvey Island's passage into the Quarter Final of the Essex Senior Cup with a 3-1 win away to Burnham Ramblers on Tuesday night.
The Gulls dominated the match against their Ryman Division 1 North opponents for long periods, with the scoreline kept respectable thanks to a solid performance from Ramblers' keeper Louis Godwin-Green.

Canvey's first attack came in the fifth minute when Sheldon Sellears, playing in central midfield instead of his usual place on the right wing, delivered a cross from the left which Michael Alaile couldn't quite connect with. Any touch from the defender would have surely resulted in a goal, but instead the ball went out for a goal kick.

They didn't have to wait much longer to open the scoring however as Moses Ademola gave his new side the lead on eight minutes. A good ball through to Ademola from Spencer Bellotti released the lightening quick striker, and Moses parted the home defence like the red sea before chipping the ball over Godwin-Green and into the goal.

Canvey continued to create chances, with Mike Jones drilling a shot into the side netting and Michael Alaile having a header saved following a corner.

Given Canvey's dominance it was therefore a surprise when the hosts equalised in the 36th minute. Moments before Burnham had forced Josh Vickers into a good save, with the follow up being cleared off of the line by a defender.

However, soon afterwards a ball was slid through for Liam Burgess down the left of the area and he scored with a good finish into the opposite corner of the net.

Having gotten back on level terms Burnham finished the first half the stronger of the two.

Heale's side were back in front only three minutes after the restart when Harrison Chatting flicked the ball down the left wing for defender Louis Baucutt to race onto. Baucutt delivered a tremendous cross to the far post where Moses Ademola was on hand to head home his second of the match.

Ademola nearly achieved the rare, and potentially unrivalled, feat of scoring a hattrick on debut for Canvey three minutes later. After Michael Alaile was fouled just outside of the area on the right wing, Harrison Chatting's subsequent free kick found Ademola's head only for a brave save from Godwin-Green to deny the on-loan Dover Athletic striker his third goal.

Godwin-Green thwarted Ademola again on 56 minutes when the striker out-muscled defender Nikki Beale and hit a powerful shot from the edge of the area, but once again the keeper made a good stop.

Canvey were racking up the chances without extending their lead. On 64 minutes Harrison Chatting had a shot saved by Godwin-Green, and seconds later Sheldon Sellears managed to nutmeg the keeper only for the ball to be cleared off of the line.

Matt Game was introduced into the action in place of Sellears on 69 minutes, and he nearly made an instant impact with a long range effort which wasn't far away from the top corner.

Warren McBean and Moses Ademola were starting to work well together, and on 77 minutes this partnership should have resulted in a goal. Ademola raced down the left and squared the ball for McBean unmarked in the area. However, the striker got the ball caught underneath his feet and the defenders were able to retrieve the situation.

With a minute of normal time remaining the victory was sealed thanks to Spencer Bellotti's sixth goal of the season. Warren McBean mis-hit a shot and was going wide of the target, but Bellotti managed to keep the ball in play and shoot across goal to score. There were appeals for offside against Bellotti from the home defence but the assistant referee's flag stayed firmly by his side.

The full time whistle sounded soon afterwards to ensure the Gulls were the first side to put their name in the hat for the Quarter Final draw.