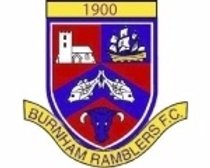 Ramblers travelled to their first away fixture at Southend Manor on Saturday. The game was spoilt by a strong gusty wind diagonally across the pitch making controlled passing football difficult for both sides.
The first half passed with neither of the goalkeepers required to make a save of note. However,
in the latter part of the half Manor were awarded a direct free kick some 30 yards out. A shot at goal followed and was well covered by our goalkeeper Chris Leonard until it struck an opponents arm while standing in an offside position and diverted in to the opposite corner. Goal awarded and Ramblers left feeling frustrated at the injustice. Half time 0-1. The second half started in very much the same manner as the first until an incident occurred in the latter third of our half which resulted in Reggie Disley being dismissed with 2 yellow cards for the skirmish.
The game then deteriorated in to petty feuds and fouls resulting from inconsistent officiating. Latterly, Charlee Hughes had an excellent chance when through on the goal but was thwarted by a good save as was Bobby Bird direct from his corner. The final frustration came when again Charlee Hughes was clean through on goal and was fouled outside the box by the Manor centre half.
The referee chose a yellow card rather than what we felt was an obvious red. Their second goal came 10 minutes from time with a slick passing move from a free kick which was dispatched confidently in the bottom corner.
Our new players settled in to the side quickly and our defence was much improved from previous matches with our work rate matching that of our opponents throughout.
Share via
FacebookTwitter
https://www.pitchero.com/clubs
Recent news