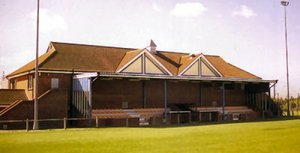 Following last Saturdays heavy defeat to Romford the players could have gone one of two ways and Manager Bertie Brayley got exactly the response he wanted, starting himself for the 1st time the team had far better shape throughout the game and deserved all three points.

On 3 minutes Menga only had the keeper to beat after he was put though by Aubynn but his tame shot went straight to the Tilbury keeper Driscoll. Both teams found it hard to penetrate until the 17th minute when The Ramblers scored their first goal the ball was played out from centre midfield by Brayley to Aubynn who beat his defender to get in a great cross to Menga who slid the ball home from 8 yards. Burnham Ramblers frustrated Tilbury by pressing high up the pitch and counter attacking down the flanks, on 20 minutes Burgess was through on goal but a great block by the Tilbury defence saw his effort go out for a corner.

Right on half time Menga thought he had doubled his tally for the night only to see his shot from the left be deflected wide by a Tilbury defender, Burnham went in at half time on top of the game and leading by the single goal.

Tilbury came out in the second half determined to get back into the game, but on 52 minutes Brayley picked the ball up deep in midfield beating three players before striking the ball home from 18 yards to beat the keeper into the far post doubling The Ramblers score.

Tilbury made a couple of changes to try and get back into the game but Burnham held fast until the 79th minute when a free kick was awarded 19 yards outside The Ramblers box, Waters struck a good shot to Greens near post all the keeper could do was push the ball against the post and see it go over the line.

Tilbury continued to pile on the pressure for the remaining 15 minutes which included 4 minutes injury time only to be thwarted in the 90th minute following a corner The Ramblers were unable to clear their box and the resulting shot was cleared off the line by Hayes Tilbury thought it had gone over the line but no goal was given.