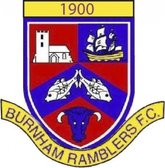 Burnham gave a really spirited performance against a very experienced AFC Sudbury team and were unlucky to go away without at leafs a point.

After a very disappointing performance on Sunday against Cray Wanderers, this team showed real spirit when they turned in one of their best performances for manager Bertie Brayley so far this season.

Sudbury got their first goal on 15 minutes following another defensive error which allowed Rymer to get in behind and score from close range. Following a shaky start and conceding the goal the Ramblers started to get confidence and played some good neat football but just could not penetrate in the final third.

Burnham put on a lot of pressure in the second half and were unfortunate to be caught on the break following a Dave Collins free kick into the Sudbury box, the ball broke loose with the fast Ayrton Coley driving deep into the Ramblers half his cross found Baker whose shot was deflected into Matt Belchers goals on 71 minutes to make it 2 - 0 to Sudbury.

The Ramblers continued to press and started to find belief in themselves and eventually the break came all be it too lat in the 93 minute when Isaac Aubynn scored from close range following a number of blocked attempts.

Time had run out and the Ramblers suffered another defeat but left with their heads held high after a good performance by the whole team.