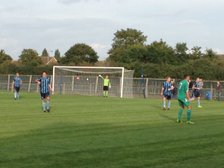 The Ramblers had a lot of possession in the first half and were unlucky to go in at half time loosing 0-2 to a 37th minute penalty scored by Buster Harradine, from the kick off Soham went straight down the left and scored their second with Ashley Walter firing in from the edge of the penalty area.

Burnham completely turned it around in the second half scoring twice to get well earned draw but should have won the game, on 52 minutes Nikki Beale scored the ramblers 1st with a header at the far post from A Ricky Evans corner, on 79 minutes Evans again was supplier for the Ramblers second goal with good work down the left sliding the ball into home debutant Jay Nash who fired home.

Man of the match Ricky Evans