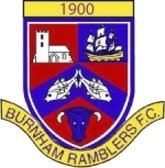 BURNHAM Ramblers staged a remarkable recovery to snatch a 3-3 draw at Ware on Tuesday night.

Keith Wilson’s side had looked set for their fourth straight defeat after slipping 3-1 behind.

But with the match drifting into stoppage time, Billy Hunt popped up with his second of the night, followed by a dramatic leveller from Terry Griffiths.

Kieran Bishop had put the struggling hosts in front after 27 minutes.

Hunt popped up with an equaliser five minutes after half-time, but Ware nosed back in front midway through the second period thanks to Marcus Milner.

Bafode Dabo Carvalho then added a late third, before Hunt scored his second of the night on 90 minutes.

It still looked too little, too late before Griffiths netted to complete an amazing Burnham comeback.