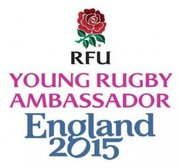 The RFU lead up and legacy plan contains a pledge to support the development of young volunteers in rugby clubs across England.

The “Young Rugby Ambassador” programme will excite and engage young people in the build-up to and legacy from the Rugby World Cup 2015 (RWC 2015) and have a lasting impact on the development of the game.

Vision
Our vision is to showcase the talents and potential of young people to club administrators, committees and local communities and to engage more young volunteers in the management of rugby clubs.

By genuinely embedding a new generation of young people in the decision-making fabric, we will transform the club environment.

Focus
The RFU will work with selected rugby clubs across the country, split into three phases between July 2013 and RWC 2015.

In our club up to four young people aged 16-20 will be identified and given the role of “Young Rugby Ambassador”.

They will commit to:
• Arrange a series of meetings/briefings/social evenings in their club to communicate the latest news on RWC 2015 using resources provided by ER2015 and RFU

• Bring alive the RFU lead up and legacy strand on cultural engagement by getting people in their local community talking about rugby via art, photography, local history, film, music, etc

• Support the RFU lead up and legacy strand on bringing back 16 to 24 year-old players with each ambassador aiming to get two 16 to 24 year olds from their community playing rugby again.