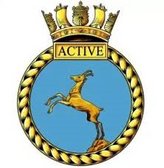 Sad to report the end of HMS Active who older members will remember as a warship adopted by Burnley in the 80`s the club built up a good rapport with the ship playing a couple of “social “ games and several of the sailors commuted regularly from the South Coast to play for the old club Caldervale . The ship and its crew were granted the freedom of the town in 1989. Part of the town's inner ring-road between Westgate and the traffic lights at the Church Street junction with Colne Road is called Active Way. One of Active's anchors is displayed at the Anchor Retail Park next to Active Way.HMS Active participated in the Falklands War, setting out from HMNB Devonport on 10 May 1982 as part of the Bristol Group, reaching the task force on 21 May. Active formed part of the main British Fleet, well east of the Falklands during the day, while escorting supply convoys to San Carlos Water or carrying out shore bombardment missions at night. On the night of 13/14 June, Active shelled on Argentine positions during the Battle of Mount Tumbledown.[1] HMS Active took part in five NGS (naval gun supports) at Bluff Cove, Fitzroy, Berkley Sound, Mount Tumbledown, and Port Stanley.

Active was later decommissioned and sold to Pakistan on 23 September 1994, being renamed Shah Jahan.

Her flag was recently sold on the BBC programme Bargain Hunt.