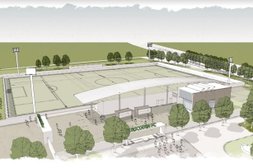 Burscough Football Club are pleased to have received confirmation today that the land required for the new stadium has been purchased by Victoria Park’s owners.

Chequer Properties Ltd. completed on the site’s purchase contract with Travis Trust’s lawyers on scheduled today, (Mon 15th) following negotiations and an exchange at the start of the year.

With the necessary planning consent granted in 2017 and work on the Section106 terms attended to, the club moves forward.

“The footballing heritage of Victoria Park in Burscough should not be lost as we make progress and relocate, Bobby Langton would no doubt have had an opinion or two, especially as new technology makes the game available to more and more in our community, particularly youth players”

The business planning work within the football club is moving ahead with strategic options for enhanced spectator facilities, developing the successful second adult squad, growing youth activity & introducing women’s football to the agenda.

Traditionalists will no doubt have strong views on retaining a grass pitch but with new technology, an accommodating FA & specific League rules, artificial turf playing surfaces are both very attractive and viable.

Naming rights for the new build stadium bring a commercial opportunity coupled with perimeter advertising spaces available. The new stadium will retain it’s close links to the popular and growing village of Burscough.

Mike said; “As an open club we look forward to welcoming supporters, players, spectators and those with positive passions to see the national game develop. Pop in for a brew on match days, watch the play and have a chat with Steve our Football Secretary, Rod our President, Stuart one of our longest serving volunteers, Martin who looks after our finances, and Dave who manages the first team, after the game.”