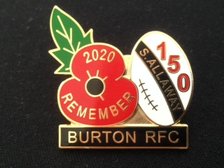 Buy a badge for £5, all profits to the Royal British Legion

Following the huge success of our poppy badges last year we have decided to continue and will do so for at least the next 48 years. The badges are available for collection from Battlestead Croft on Saturday and Sunday from 9am, so if you would like to order one please email membership@burtonrugbyclub.co.uk and we will add your name to the list.
***187 badges reserved already***

The design includes the name of the first member on the memorial from World War One.

Stanley Newton Allaway
Born in Ashbourne in 1886
Moved to Burton and lived at 26A St Paul's Street West
At 15 he was working as a Brewers Clerk and later became a Brewers Traveler at the age of 25
Enlisted in the army at Lichfield and like many others his service records were destroyed by fire during WW2 after in an air raid by the Luftwaffe
On the 9th October 1917 at the age of 31 he was listed as ‘Missing presumed Dead’. He is commemorated on Panel 7 of the Tyne Cot Memorial in Flanders.
In his will to his mother he left £23.14d (£16,400 in today’s equivalent