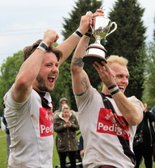 without competing in the final

We have been informed by the Staffordshire Rugby Union that we have been crowned Staffordshire Senior County Cup winners for the second successive season. This is without competing in the final which was due to be played on the evening of Thursday 26th April at Burntwood RFC.

The reasoning is that opponents Longton are unable to field a side due to not having enough fit registered players.

The organising committee and County President have discussed the matter at length with the Burton RFC Playing and Coaching team and we looked at postponing the game to pre-season or even finding alternative opposition but due to the short notice and the disruption this could cause to the pre-season schedule it was decided to accept the SRU proposal to award the trophy to Burton.

Not the way we would have wanted to retain the trophy however congratulations to all the players for achieving our first goal for this season, we now need to do the double and secure promotion.

We hope to arrange a suitable time to present the trophy to the team.