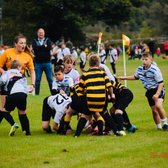 Burton Under 12's played their first home game of the season against Derby on Sunday. With a number of new players, they put in a great performance and scorded some scintilating tries. There was much improved passing of the ball, realising that space that can be opend up as the ball goes wide. Lots of positives ahead of the new season from all the children

In addition, we have evolved the 2 x Core Values trophies introduced last year. The first trophy is now for a child that best represents two selected Core Values during the game. This week, we chose Respect and Teamwork. The child was selected by a parent, and this week it was awarded to Will. The second trophy was a Performance award. This was for a child who the coaches believed put in a stronger than normal performance, had implemented teachings from training, played in the right spirit, all for the benefit of the team. This week, the trophy was presented to Harvey. Congratulations to both!

First game of what we hope will be a very exciting season!