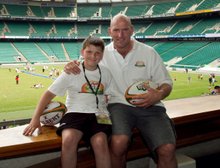 During the summer one of our U13's squad, TIM GORING, attended a training masterclass with the great Lawrence Dallaglio.

Tim Goring was nominated to attend a Lawrence Dallaglio Training Day at Twickenham after winning a FAIR PLAY award at the U12's Staffs Festival in April. His mother kindly wrote the following report so that we can all share in Tims experience. WELL DONE TIM!!

DAY AT TWICKENHAM WITH LAWRANCE DALLAGLIO by Mrs Rose Goring.

We left for Twickenham on Friday afternoon. Tim couldn’t wait to get their. Once we arrived we went for a meal. at this time Tim’s nerves kicked in, he went really quite and didn’t eat his meal.
We had to be at Twickenham Stadium for 9.30a.m about 20 minute walk from where we were stopping.
Arrived at Stadium for 9.10a.m, we had to go into the pass it on dome to register, where Tim was given two t-shirts, we went outside to wait for the guide to come and fetch us, Tim and his dad went to have a look at the gates to the Stadium where they saw Lawrence starting to do some autographs, so Tim got his BRF top signed, and had photo’s took with Lawrence their was about 120 children their age range from 7 to 16.
At 10.00a.m we had a briefing and had rugby boots checked. They were split into different age groups. At this point they took the children away and said we would not have contact with them until they had finished training.
A rep took us parents into the Stadium where we were shown where to sit and was asked not to go on the ground.
The children went into the changing room where they official had a chat with Lawrence who explained to them what they would be doing for the day. After Lawrence led them out running through the tunnel where the parents cheered as they came out. Here they had official photo’s of the whole group and the coaches and Lawrence. They were then split back into their age groups and started their training, Lawrence Diallgo was on the ground the whole time, going round each group giving them tips, and advice. Every 30 minutes a hooter went and they changed to a different part of the ground to be shown something different. The things they had help with was tackling, scrums kicking and catching, agility and touch lines. All players have jelled well for saying they had just met.
At 12.00noon they stopped for lunch in the royal box where they were able to chat to each other and Lawrence. He then came down and signed even more autographs and chatted to some of the parents. After lunch they went back onto the ground, this time they played some matches and was watched by Lawrence.
At 1.45p.m they gathered together for a de-briefing then each age group went up to the royal box to have a photograph took with Lawrence and was given a bag of goodies, they also got to keep the rugby balls they had been playing with.
The thing we liked the most about Lawrence was that he didn’t rush you, he had got time for every one, even me giving him a kiss on the cheek.
It was a most fabulous day, tiring but goooooooooooooooooooooooooood.
This is what Tim thought to his day at Twickenham.
I had a brilliant time and it was amazing because I might not be able to do that again. I learnt how to pass the ball with out spinning it because if you spin the ball you are wasting time so it is better if you don’t spin pass. Oh I have an idea, if you get a old car and take the hand break off then all of the players could push it then push it 1 by 1, this will help us to push forward like you do in a scrum. I would love to do this again.
After the event we stayed on for the family fun day, where Timothy went on the ground to kick the rugby ball over the post, where he managed his Twickenham conversion. (perhaps his one and only). There was lots of other activities through out the day. They also attempted to break the world record for the quickest 3 legged race.
Thank you for this opportunity.