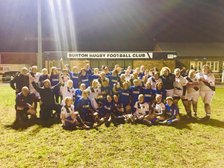 In a nail-biting encounter, Burton ladies took on visitors from Matlock on what turned out to be a great night for rugby.

In a curtain raiser to International women’s day on Thursday 8th March, on Wednesday night, over 200 spectators gathered at The Croft, home to Burton Rugby Club, to watch the first competitive game of a full senior Burton women’s rugby team in over five years.

Dry, windless and not too cold, the 7.30 KO game was played under lights and in a quietly excited atmosphere.

Given it was their first competitive match the Burton team got off to the best possible start, pretty much dominating the first quarter, which was played entirely in Matlock’s half. All the early pressure by Burton was relieved with a series of clearing kicks by Matlock who staged a dogged defence in their own 25.

For a brand-new team, many of whom were recruited from a recent RFU Inner Warrior event, Burton’s ball retention in the tight was impressive but some slack hands too often prevented effective distribution. So, while the forwards were able to make regular progress through the middle and there was some pretty good penetration from the three quarters, Burton lacked the ability to finish and their early pressure couldn’t be turned into points.

It took Matlock 17 minutes before they actually got into the Burton half. Despite some reasonable defence and a couple of pressure relieving kicks from Burton, Matlock went over the Burton line on 20 minutes, only to be held up. But Matlock kept up the pressure and kept possession, returning just 2 minutes later with a sparkling run from Becky Mead who went around the Burton defence to touch down under the posts. With a straightforward conversion Matlock took the first seven points.

Burton responded with some real spirit and, almost immediately from the re-start, ran Matlock close. The match settled and returned to the pattern of the first quarter as Burton camped back in the Matlock half but their in-experience in attack forced a series of Burton knock-ons from open play and after two more strong but fruitless attacks by Burton, at half time Matlock’s seven point advantage stood.

Second Half
Matlock started well in the second half pinning Burton into their own 25. The action at the contact was pretty brutal as players tired and five minutes into the half Burton lost lock Laura Yeomans to a nasty looking knee injury.

As Yeomans was helped from the pitch Burton raised the tempo with some great handling and a couple of scorching runs that bought the home team close to scoring. Burton camped on the Matlock line for nearly five minutes sniping and sniping before Scrum Half, Elivra Moren, nipped through to score Burton Ladies first try and the crowd, quite literally, went wild.

Burton failed to convert and from the re-start came under immediate pressure again but defended competently, eventually clearing from inside their 25 up to half way. The next five minutes treated the crowd to some end to end stuff with one incredible breakaway from Elivra who ran through half a dozen tackles and, starting from within her own 25, she covered over half the pitch only to be bought down 10 metres short of the line and what surely would have been a match winning try.

The dying minutes were played out centre pitch and as the final whistle was blown Matlock’s lead remained at two points. 5-7 to the visitors.

Considering it was their first competitive game Burton ladies looked good and had a few more balls gone to hand in the first half could easily have come away winners. Matlock however stuck to their task and ultimately their experience won through. The tackling was hard, the movement of the ball impressive at times and pound for pound you’d be hard pressed to find more exciting rugby than the large and noisy crowd were treated to at The Croft tonight.

You know what though, what was great to see was the excitement on the ladies faces from both teams at the end of the game. As the champagne popped it’s fair to say that both sides went to the changing rooms happy with two really, really credible performances.

Evolution of Women’s Rugby in Burton
From a near standing start two years ago, Burton Rugby now boast a girls and ladies section with well over 100 players regularly enjoying rugby over four age groups from U13, U15, U18 & tonight’s Ladies 1stXV. With training every Wednesday and Thursday evening and games on most weekends, there has never been a better time for girls and ladies aged 11-35 to give rugby a try.

As a club we’re really lucky to get some un-wavering support from an army of volunteers and great club staff that really look after us on games days (fantastic curry tonight). We’re also truly grateful to the local media for supporting us by regularly letting anyone know that if you want to enjoy your rugby, gents and girls…. but especially the girls, then Burton is the club for you.

So, girls & ladies, don’t be shy if you fancy giving rugby a go, then as the nights warm up, why not pop down to Shobnall Leisure complex at 7ish on a Wednesday or Thursday night and say hello.