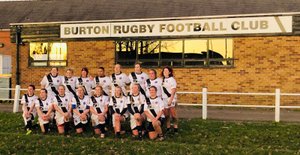 Burton Ladies were fired up for what was set to be an 80 minute forwards vs backs battle!

Burton opened the encounter with four early tries with Full Back Emma Bogbacki running three tries in through some sharp running lines.

Birmingham Uni soon woke up and started working to their strength...pace! They started to work around the forwards and scored some break away tries.

Burton had to work hard through the next 30 minutes through several yellow cards which left them 1 player down for the whole time.

Birmingham Uni pushed back scoring several more times but some great forwards work from Burton allowed us to run in two more of our own despite being at 14!

The game finished with a flurry of tries from both teams but Burton Ladies managed to hold on even with Birmingham Uni finishing the game with a converted try.

Final score 49 - 43! A close one for Burton Ladies but well deserved.