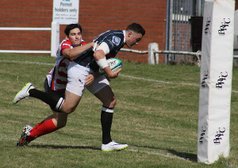 Burton overcame a spirited Handsworth in round 1 of the Staffordshire Cup and progress to the semi-finals.

The Burton coaching team took the opportunity to hand out debuts to Will Smith at Prop, Jack Neal on the flank, Jack Handy on the wing, Alex Nesbitt on the wing, Nick Oxley at Full Back and Eddie Saunders from the bench in the back row.
Handsworth kicked off and Burton took the ball through a couple of phases before Neal burst into the opponents half, however a penalty was conceded at the breakdown. Moments later Burton dominated the first scrum. On six minutes Handy gathered a kick on half way and ran the ball back into the Handsworth twenty two. From the next breakdown Sam Smith hit a great line to break through the first up defence and then stepped the Full Back en route to the try line. Dave Archer added the conversion.
On ten minutes Oxley made the first of many fine runs, however on crossing the try line lost control of the ball. Burton then won the ball at the scrum and transferred the ball swiftly out to the left wing where Handy crossed for a try.
Loz Betty looked threatening in the centre on a couple of occasions but Handsworth defended well. Burton were dominating the territory before Archer, playing at Fly Half, weaved through from ten metres out to score and then convert.
Handsworth got a toe-hold in the game for the first time and were on the attack for several minutes before spilling the ball on the try line. Moments later a line break saw Oxley needing to make a try saving tackle. The Burton forwards then rumbled up field with James Burrough, Josh Cartwright, Dave Henry & Ed Henry all involved, only for the backs to lose the ball in midfield.
After the break Burton were immediately on the offensive and some slick handling produced an opportunity for Handy to cross for a second try. Shortly afterwards the same player received a Yellow Card for a tip tackle. Burton then conceded a series of penalties which Handsworth used to try and drive over from line-outs, however the Burton defence was resolute. Saunders, Ken Archer and Eddie Nicholls joined play from the bench. Eventually Burton broke out of their half with a break up the right wing by Nesbitt. Entering the Handsworth twenty two the Colt did well to find support and allow the attack to continue before Archer crossed for a try which he then converted.
Play went from end to end for several minutes. Handsworth then survived a series of scrums under their posts before going on the attack once more through some direct running but then squandered a three on two. Burton were more clinical on their next attack and slick handling gave Oxley a try which Archer converted.
Handsworth applied pressure before Darryl Banton ripped a ball from the maul and cleared to half way. Despite being 38 points down at this stage the visitors continued to battle away and their efforts were rewarded with a try the next time they got close to the try line. A well struck conversion increased their tally to 7.
Share via
FacebookTwitter
https://www.pitchero.com/clubs
Recent news