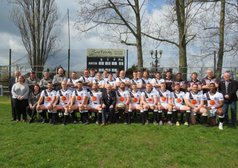 Last Kick of the Game

Burton travelled to South Yorkshire on Saturday to play Sheffield.

The two clubs first played against each other in 1904 and have played many times since. The games have always been hard fought and this one was no exception.

The rain which started as the game was kicked off made it very difficult to play open rugby and both sides made handling errors. Burton came under pressure from the home side early on but some good scrambled defence managed to keep the home team from scoring. A knock on gave a scrum put in to Sheffield on the Burton 5 metre line but the visitors took the ball against the head and were able to clear it. It was now the visitors’ turn to attack and a kick ahead was knocked on by the Sheffield fullback. Sheffield were penalised for collapsing the scrum so Will Simpson kicked a penalty goal to open the scoring.

Although the Burton pack was stronger in the set scrums, they were unable to turn the pressure into points. In fact the defence by both teams was strong and neither side were able to penetrate so the half time score was 0-3.

Not long after the restart Burton were penalised for an offence in the scrum and the home team were able to equalise. They then changed their tactics and started to kick the ball to the corners keeping the visitors trapped in their own 22 for long periods. However, they were still unable to breach the Burton defence.

There were the two penalties the first by Sheffield and then by Simpson for Burton from the halfway line. Burton were penalised for an offence at the breakdown and the Sheffield kicker scored a penalty goal with the last kick of the game. This was a better game than the score line would suggest, with both sides fighting hard to try and win. They were not helped by the weather conditions and neither side was able to score a try. Burton had to satisfy themselves with a losing bonus point. The final score was Sheffield 6 Burton 3.