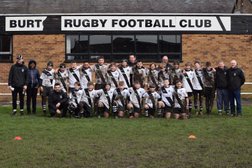 A great game of rugby with improved running and tackling

A sunny morning found us (and an amount of insects) back in our ancestral home of the cherry orchard for this match against Coalville.
Four quarters were played with the following first up :- Noah, Bailey, Harry, Bob, Will, Joel, Flynn, Alex, Beau, Matty, Phil, Chris and Dylan. After taking the kick off Coalville looked solid in the scrum and released some fast runners but Dylan stepped in with a try saving tackle. Unfortunately Coalville were able to release their fast winger 3 times, once after a good positional kick in order to get over the try line. Lewis came on for Alex after a knock to the head. Burton had some good runs, notably by Joel who tried to take on all of Coalville himself, but simple handling issues meant they couldn't convert their hard work into tries,

Quarter 2 saw the following players:- Sean, Theo, Josh, Lucas, Joe, Kian, FLynn, Lewis, Beau, Reuben, Alfie, Matty E, Logan. Lucas started the scoring with a good try capitalising on running from Sean and Reuben. Coalville were disallowed a try after it was grounded over the dead ball line and from the resulting scrum Burton showed some flair I their running from their own try line. Improved tackling and running were evident with Sean dragging at least 3 Coalville players along towards their try line but unfortunately couldn't get over the line.

Quarter 3 saw the line up of Harry, Bailey, Noah, Bob, Will, Joel, Reuben, Lewis, Matty E, Phil, Dylan, Chris and Matty. Despite some great tackling from the likes of Matty Coalville managed to score a well worked try. From the restart there was a great catch from Reuben setting up a good attack, Matty E went over in the corner for a try after a great delayed pass from Joel. Coalville responded with another try after moving the ball wide but then quick thinking meant Reuben got over the line for another Burton try from a free kick.

Quarter 4 started with Joe, Theo, Josh, Kian, Lucas, Sean, Lewis, Flynn, Alfie, Matty E, Logan, Beau and Matty. Matty E had a great individual run through the Coalville field but was brought down just short of the line. Coalville scored from an interception and a quick dash for the line but Burton responded with Sean scoring after a driving maul.

Overall a much improved performance with running, rucking and tackling being fantastic on the whole but some simple handling errors kept the team on the back foot. If the simple errors can be eliminated then the positive attitude from the whole team will bring forward better results.