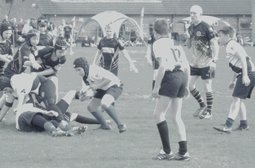 A tough opening game for the lads against Lichfield.

Well glad to be back and playing and we have to report that the lads put in a sterling performance this weekend.

Our opening try was pure poetry with all the backs being involved from the Scrum with the young lad Conor Bradley finishing off what was a text book training ground move.

Leadership from the pack was first class Monty/Oli and Riley making some great tackles in the loose, the rucking and powerful running from Dougie and Herbie was relentless and a joy to watch. There was also great handling by Tom at the back of the pack and he also showed some great desire in the tackle.

The backs played some exciting forward flowing rugby when they had possession, and they were also stout in defence holding off a number of potential tries. Jude/Rhys/Conor/Ethan/Charlie/Job and Josh were progressive and forward thinking in their play at times and there is a lot more to come from this group.

Great cameos from Jake, Charlie and in particular Isaac was great to see - all these lads playing their first games for Burton. Their effort and enthusiasm was great to see.

Tiredness, injuries and a depleted squad ultimately played a part in the end result, but the boys took Lichfield the distance, and they can all be proud of their efforts on the opening day.

Well done boys and lets look forward to the rematch.......

Everyone to meet at the Club for 0950hrs.
We have been allocated the changing facilities under the Vic Roebuck Suite.
One of the Coaches will be there to show the lads where to go.
Once everyone has arrived we will all go down to the Pitch together.
Please note that we have been allocated Pitch 5 on the Oxhay - please check the Board at the Club for actual location.
Can you also ensure that all boys have their Shirt and for after the game - no exceptions.
There will be free food for the lads after the game -
Look forward to seeing you all and lets get the season started.