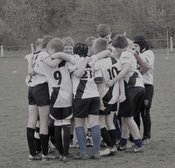 It Really Was A Game Of Two Halves

Longton returned for this rearranged fixture on the Oxhay.
Burton got off to a rally slow start allowing Longton to dominate in the opening skirmishes.
Some lacklustre tackling and ill discipline saw Burton concede 4 tries without reply in the first 10 minutes. Then over Longton went again to make it 5-0 with no response in the first 15 minutes. Would the boys respond........

Longton then began turning the screw and the lack of Burton defence meant that Longton were able to run in a further 4 tries unopposed. So at half time Burton were 9-1 down.

The restart came and Burton decided to awake from the earlier slumber and tried to start and make a game of it, great running by Tom Hodder saw him go over the Longton Try Line. Herbie Allen another strong, direct run at he Longton backs saw him break free and score another one for the Burton Lads. Now we were back to 9-3...

It wasn't to last Longton ran a further 2 tries in after this. But back came Burton again with a jinking run from the Welsh Wizard Aidan Raw. He then backed this up again with another Solo effort, and finally quick backs play saw Heath score in the corner. But Longton had the last word with a try in the last minute.

Meet at The Croft at 10am.
Pitch allocation and Changing Facility to be confirmed.
Please ensure that players have shirt and tie for after the match