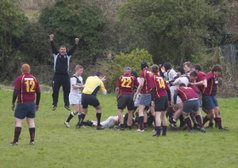 Bucks through to final!

On a very cold and blustery Mothering Sunday afternoon a tough encounter was anticipated bearing in mind Evesham boasted an equivalent unbeaten season to date.

Kicking off with the wind in their favour Bucks made an impressive start and from a line-out on the Evesham 5 metre line the ball was well won and then transferred very efficiently to outside centre, Alex Nesbitt, who ran a great line, beating 2 defenders to score just to the left of the posts. The conversion by Frank Simpson gave the Bucks the perfect start - Evesham had not yet touched the ball and found themselves trailing by seven points after 3 minutes (Evesham 0-7 Bucks).

Evesham hit back just 2 minutes later, when the Bucks were penalised in front of their own posts and the kick was successful (Evesham 3-7 Bucks). From the kick-off the Bucks again demonstrated their hunger for this tie with several totally committed runs involving forwards and backs alike. One of their strengths, direct running and passing in the backs, featured prominently in the next few minutes, despite the cold and windy conditions. The forwards work rate was very evident and plenty of possession was won as a consequence. The Bucks whilst not being totally dominant were able to keep the big Evesham pack on the back foot with a combination of strong penetrative runs in attack and ferocious tackles in defence!

The Evesham defence was being tested regularly most notably by number 8, Harry Roddick, who made several powerful offensive runs, and the next score came after around 16 minutes when Louis Sanders found some space on the narrow side and cleverly linked with right-wing, Ed Wainman, who finished strongly to score a deserved try in the right-hand corner. Despite an excellent attempt, the conversion went just wide and the Bucks lead increased (Evesham 3-12 Bucks).

Once again Evesham hit back with another successful penalty after about 20 minutes to reduce the deficit slightly (Evesham 6-12 Bucks). The remainder of the half then became a real battle, with both teams testing each other out in a very fair but committed manner!

Most of the play was concentrated in the middle of the pitch other than when the Bucks were awarded a penalty just before half-time. Eddie Nicholls found touch with an excellent kick and Bucks had the throw-in on the five metre line. Ben Wileman took the ball well at the front of the line and the Bucks were able to drive the resulting maul over the try-line, where Christian Todaro touched the ball down in what was a “classic line-out and drive” move – one which delighted both the on-looking coaching team and supporters alike! Better still Frank Simpson added the conversion from wide out to increase the lead further (Evesham 6-19 Bucks).

The half-time whistle signalled the end of what had been a very satisfying first period for the Bucks!

The half-time team talk concentrated particularly on a job well done so far but with the warning of what to expect from a competitive Evesham team which would be playing with the wind in their favour during the second period. Thankfully this warning was taken on board and for the first 5 minutes or so of the half the “midfield battle” resumed!

Both sides showed real hunger to go on and try to dominate the game which resulted in further stalemate until the Bucks demonstrated great patience in their play and following a series of forward-driving rucks on the right, chose the right time to move the ball quickly left through the backs hands. Alex Nesbitt scored his second try of the game finishing powerfully on the left side.

The wind got the better of the attempted conversion and the Bucks lead widened with 12 minutes of the half gone (Evesham 6-24 Bucks).

For the first time in the match the Bucks now began to dominate Evesham for sustained periods. The good link play between forwards and backs continued with captain Kieran Hall, Louis Sanders, Harry Roddick and Nesbitt all featuring strongly at set pieces, particularly scrums. The Bucks pack were really enjoying themselves and causing major problems for their opponents.

The next score did not follow until around half-way through the second period when once again a combination of excellent forward drives and strong running by the backs eventually lead to Kieran Hall scoring just to the left of the posts. The conversion from Frank Simpson was successful this time and the lead now looked commanding! (Evesham 6-31 Bucks).

Unfortunately the Bucks were then guilty of “taking their foot off the pedal” a little and allowed Evesham to get back into the game! Following a short period of sustained pressure, the home team were awarded a penalty deep in the Bucks “22” and scored a converted try near to the posts (Evesham 13- 31 Bucks).

This proved to be a “wake-up call” for the Bucks who responded with some ferocious defensive tackling and aggressive running from the pack to keep a resurgent Evesham team at bay. Despite this Evesham were the next scorers again when following another penalty award they moved the ball quickly right and scored a try on the right-hand side, which went unconverted (Evesham 18-31 Bucks).

The Bucks were to have the final say in the game with what was probably the best try of the day, demonstrating the true strengths within the team. Despite being reduced to 14 players during the last few minutes the move started on their own twenty two metre line from a set piece which was superbly secured. The ball was moved swiftly through the backs hands finding its way to Cameron Gaunt just inside the Evesham half. Gaunt then showed his lightening pace and determination to beat the opposition defence and ran his try in under the posts. Nesbitt slotted the conversion to complete the scoring (Evesham 18-38 Bucks).

The last few seconds of the game were closed out and the Bucks can now claim to be one of the leading eight clubs in the country! They face Silhillians in the Regional final in two weeks time at Broadstreet RFC – an achievement the whole squad, coaches, parents and club can be truly proud of! Well done to everyone involved!

Man of the match was given to Harry Roddick for an awesome performance at Number 8! He was the best of many fantastic individual performances throughout the squad. However, one of the most pleasing things to see was the togetherness of the age group demonstrated by the fact that even some players not selected travelled all the way to Evesham to support those who were.