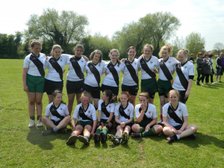 9 Burton Girls traveled over to Melbourne to take part in their annual touch festival, a great day was had by players coaches and spectators alike.

Burton were drawn in a group along with Long Eaton and Melbourne for the 7's touch games.

Burton were first faced with a quick Melbourne side and although Melbourne were quick and skillful the fantastic defensive line lead by captain Kelsey was impenetrable and Burton showed great attacking and out powered Melbourne with all the girls getting on the score sheet. Burton also showed what Rugby is all about by allowing one of the smaller Melbourne girls to score a try which i am sure made her day feel very special too.

Burton then played their second game against Long Eaton and once again the defensive line was fantastic with Kelsey and Tyia making their voices heard. Burton were proving to be too strong for the opposition in more ways than one and were even warned about the strength of their contact at one stage (believe it or not it was Hollie one of our smaller players).At half time with Burton in a commanding lead it was decided that to handicap Burton and help Long Eaton Burton would only be allowed 4 touch tackles before we would hand the ball over, this was seen by the Burton Girls as a challenge and they upped their game even more (we did not think this was possible) and continued scoring at ease. Once again Burton allowed Their opposition a moment of glory and allowed a small Long Eaton girl to score.

The festival ended with a Melbourne and Burton mixed xv against a Barbarian xv which included Melbourne, Hinkley and Peterborough Once again the Burton players were proponent linking up brilliantly,which gave us a 2-0 lead at half time. Unfortunately the referee did not agree with our direct running style and stopped us playing our normal game.In the end 3 tries were scored by each side but one Burton try was disallowed, hey ho Never mind we were the better side and everyone could see that.