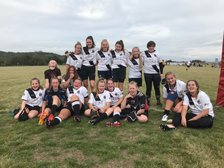 Too Strong for Sleaford

In their first game since December 8th the U15 girls were simply immense.

They started the game with such intensity that they were over the try-line in the first few minutes of the match, when Captain for the match Tara flew down the wing to grab her first of two tries. Trusty kicker, Hannah, converted this but then missed the next when Caitlin went over quickly after for Burton's second try, this was to be the only miss of the game as she went on to convert 7 of the 8. Tara then got her second followed by a try from Hannah as Burton closed out the first half 26-0. Sleaford hit back straight after the kick off for the second half with two unconverted tries. Tara then got injured in a tackle, holding the game up for a while whilst her injury was assessed, her game was over with a fracture to her clavicle. Burton regrouped, regained control and hit back with tries from Hannah and Hollie, then Mary-Kate smashed through the middle of the park to get her first try for the club, she epitomised what all of the forwards (Emma, Heather, Mary-Kate, Molly & Neve) were doing as they worked tirelessly to set up the backs (Caitlin, Hannah, Hollie & Tara) for their scoring opportunities. Neve gained 'man of the match' for her efforts and it was great to see Heather back at Hooker after her long lay off with an injury picked up in the first game of the season in October. The game was finished when Hollie went over for her second try right in the corner, leaving Hannah with an almost impossible kick, which to the delight of all the girls sailed over the middle of the posts, the ref then blew the final whistle and a superb victory against a team that never gave up fighting was achieved. I couldn't have asked for any more out of any of the girls, they were all fantastic! Hope to get Tara back soon!