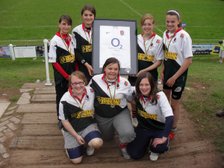 Burfield U15’s travelled north to the Wirral to compete in the North of England 10’s with a depleted squad.

Burfield opponents sportingly matched numbers to play 7 a side at Caldy Rugby Club.

In the group matches Burfield beat Colwyn Bay 14-10, LSH 25-12 and against Tyldesley every player scored in a convincing victory. Newcomer Chelsey Grimley made an impressive debut scoring a couple of tries during the tournament.

Keswick were beaten in the semi final and Manchester Sandbach proved tough opponents in the final as they opened the scoring. Burfield replied with a score by fly half Sarah Nicholas and took the lead with a try by Phoebe Jay converted by Nicholas. The pair repeated the scoring to secure a Burfield victory 19-7.

Girls interested in playing rugby can email lichfieldladies@hotmail.co.uk for information.