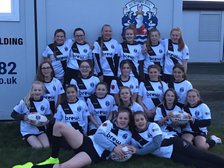 Burton too strong for Market Harborough

Burton U13s who played their second fixture against a younger Market Harborough team.

Our girls were joined by 3 players from Lemmington RC.

From the start of the game you could quickly tell that our speed and physical size would over power the opposition, even though it was only a game of touch.

A fantastic performance by the 5 Burton girls with great match experience gained.