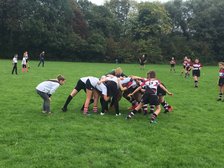 On a warm (verging on tropical) day The Vipers gathered at The Croft for their second competitive outing of the season and their first full match together. The team had what will probably be their sternest test of the season against a well-organised and committed Tamworth side.

From the first whistle Tamworth imposed themselves on the game and did to us (in the opening quarter) what we did to Coalville and Leicester Forest just three short weeks ago. Despite some heroic defence from Isabel, Lucy (T) & Maggie the team was a bit taken aback and let in what the ‘video replay’ showed to some fairly soft tries as Burton took a few minutes to settle down and get the measure of the opposition.

Tamworth didn’t have it all their own way however as Amélie, Tyler, Neve and Eryn finished off some excellent building work by the rest of the team to run in a couple of second quarter tries to partially balance the scoreboard. Tamworth’s discipline was tested as they gave away a couple of penalties for high tackles, which helped keep The Vipers in the game as we went to half time.

At the half time break the coaches asked everyone to move up the pitch at kick offs and for more commitment in the tackle as more often than not we were giving the opposition too much space to build pace, before making half tackles then releasing, making our defensive job harder than it needed to be.

Into the second half - and special mention must go to Courtney who more often than not, bravely, took the ball from kick off and into some rough first contacts. As the game wore on we didn’t let our heads drop and despite remaining under pressure saw some really impressive runs from Lucy (C), Bronwen & Eryn. It was especially pleasing to see more spectacular offloads from the tackle. This is a real strength of this team and if we can back this up with closer support and accuracy of passing this element of play bodes well for the future.

As we went into the final quarter Jessica took a real knock, in what was developing into quite a passionate match at times. It must be said that despite her moment of rough and tumble (as she was bundled into the crowd) Jess really did exemplify the spirit of this young team as she composed herself and stayed on the pitch to finish the game.

So, whilst the Vipers didn’t prevail today, as we left the pitch it was clear we’d had a hard but enjoyable match and gained some valuable experience to take forward to our next games. For a young team like ours to play such a well drilled, long standing and organised opposition as Tamworth and leave the pitch with their heads held high and a smile on their faces says it all really.

Thanks to the players – you all showed some real sparks out there, the parents of both sides, Martin Calladine for doing duties and of course our coaches/ref combo. It was a great Sunday spectacle with lots to reflect on but even more to feel really proud about as we look forward to the rest of the season.