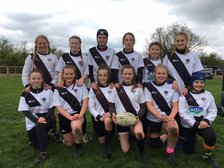 Great start to a great tour

Three games lead to a great result for Burton U13 Girls

We played three games as part of the Worcester Warriors tournament, that served as a curtain raiser to a memorable weekend of rugby & fun for Burton's U13 and U15 girls.

First up the U13 Girls played their Worcester counterparts in a game that was literally broader than we were used to. On the widest pitch we played on all season Worcester outpassed us to begin with. This combined with our traditional slow start to see us concede a couple of scores before we got really started to play our game. We went into the halftime break losing 2/1 but you could feel we were getting up a head of steam.

Some strong rucking and, as we got used to the pitch, some reasonably good hands got us back into the game. We benefited from some strong individual runs and a solid defence in the second half drawing that 2/2.

So a plucky performance against a well drilled Worcester side meant we held our own loosing 5/3. A result that really was testimony to the 13s commitment and tenacity.

According to tour rules, as the losing side, the girls duly left the pitch in an elephant stylee :-)

Match 2 was a different story against a more evenly matched Weston-Super-Mare Hornets. Burton dominated from the start in every area of the game and rucked, passed and even kicked their way through the game.

The players enjoyed the freedom that the Hornets afforded us but more than that were given the space to demonstrate how they have developed both as a team and individuals throughout this season. At the final whistle, Burton ran out 6/1 winners resulting in a tally for the day that we're going to call a 9/6 win for the tournament. Oh yeah! that's how we count it.

To follow tour rules, as the winning team, this time we flossed our way from the field of play bewildering spectators and officials alike.

Seriously, you don't have to be mad to play here but it doesn't half help.

Thanks to the organisers, thanks to the traveling support but most of all thank you to the girls that have given us some memorable rugby this season. We're looking forward to the presentation evening next week and of course next season.