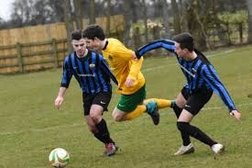 There's some new faces at BPWFC

Burton Park Wanderers are delighted to announce the signing of Jacob Bindley and George Coleman who both go straight into the squad for Saturday’s league game vs Daventry.

Promising attacking midfielder Bindley joins for his second spell at the club having made a solitary appearance during the 2015-16 season, previously Jake was with Rothwell Corinthians for whom he scored 3 goals in 11 starts during his breakthrough season.

Further transfer news is the completion of Alfie Oakman’s registration from Huntingdon Town where Alfie started the season, making 3 appearances. U18 player Keoni Southwick has signed UCL forms after training with the first team for a month.

Midfielder Charley Evans has completed his move to Harborough reserves.

Finally, the club can reveal that coach Glenn Symons has left the club with immediate effect. Everyone at Burton Park Wanderers would like to thank Glenn for his services and wish him the very best for the future.