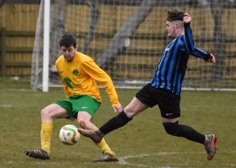 Since the beginning of the season there have been substantial changes in BPW personnel, the tough start to the campaign has seen drastic alterations to the Park Wanderers squad.

Whilst the latest transfer captures by boss Luke Smith have been -
Experienced defender Michael Duroe from S&L, former Blackstones forward Marcus Dowman from Whitworths and young winger James Reed from Rothwell Corinthians for his second spell at the club.

Everyone at BPW would like to welcome the above with open arms and wish them well in their time at the club.