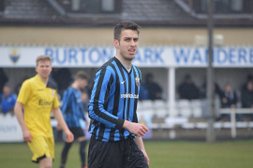 Burton PW lose at home despite making the perfect start

An unfamiliar Burton looked to new boy Brian Boyle to occupy the 9 shirt, with the returning Adam Church getting the nod in midfield. The injured Ian Hay played through the pain to make the starting line-up.

The home side started confidently keeping the ball well and it took only two minutes for Brett Smith to open his account for the season after latching onto Ian Hay’s through ball and rounding the goalkeeper.

Park Wanderers were good value for the lead and Ian Hay almost doubled the cushion when through on goal only for the defender to recover well. Sam Dixon raced clear on the right but the visiting keeper was out well to clear.

Burton’s perfect start was blown away on 27 minutes when Dan Silver scored the equaliser with a long distance shot from the right which John Bowden could only parry into the air and eventually into the back of the net. Levi Squillance put Town ahead four minutes later, breaking quickly from a Wanderers attack to hit a low shot into the net. Silver grabbed his second on 33 mins, latching on to a through ball and lobbing Bowden from 25 yards.

Once again a broken down Burton attack resulted in the visitors extending the lead, confusion in the penalty area leading to a fourth visiting goal.

Ian Hay’s well struck free kick was smartly saved to deny the home side any way back into the game. 3 quick substitutions ended up leaving BPW with 10 men after captain Carl Moran was injured during an attacking corner.

Full back Aiden Smith saw red for the third time in his relatively short Wanderers career after picking up a second yellow card. To their credit, the 9 men of Burton did not give in and restricted Buckingham any further clear opportunities.