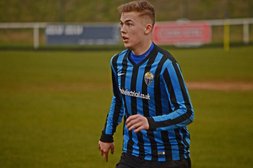 A depleted Park Wanderers side included recent goalkeeper John Bowden in central midfield. Skipper Jordan Watt was moved into the centre of defence with late signing Scott Richards as the number 9. Coach Brad Kineton made his first start along with young goalkeeper Otto Eagle making his UCL debut.

Burton were the dominant side in the opening half and it took only 5 minutes for Scott Richards to break clean through, his low shot was saved to the home keepers right.

Richards created himself another chance running clear only for the defender to recover and tackle well. Sam Dixon's centre found Taylor Wilson dangerously on the penalty spot but the midfielder miscued completely when going for the volley.

The next opening fell to Charley Evans who chose the square ball to Sam Dixon who smashed the ball home into the left of the goal, the deadlock remained unbroken though as the 'goal' was ruled out for offiside.

There was time before the break for Brad Kineton to get his shot off from inside the area, the home goalkeeper once again saved well.

It was on a negative note the first half ended as the dangerous Scott Richards was injured and substituted.

Park Wanderers were under more pressure through the second half and allowed Woodford to press high and fast.

Paul Govier put the Reds ahead on 56 minutes with a header from a corner. The lead was nearly doubled as a breakaway on the right hand side resulted in a speculative effort which evaded defence and goalkeeper to strike the post.

The lead lasted just nine minutes. Chris Hart found Brad Kineton on the left who beat his man to shoot, McCarthy saved well but only as far as Charley Evans who squared the contest with a Park Wanderers equaliser.

Woodford edged the remainder of the contest but only created one clear opening with the home forward running onto a ball over the top, Matt Coles was the Burton hero with a perfectly timed tackle to see off the danger.