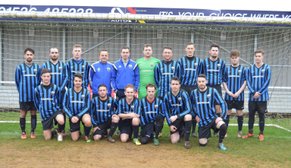 This was a missed opportunity for Burton as they failed to capitalise on the dismissal of Wakes keeper Alex Brown midway through the first half.

Bourne took the lead seven minutes in when Rob Dunn's through ball was slotted just inside the post by Zak Munton as goalkeeper James Burrows advanced.

Burton's Matt Coles was off target with a header from an Aidan Smith free kick.

The contest livened up when Brown impeded Brad Kineton as the home striker went round him in the area. Brown was dismissed but Andy Moss donned the gloves and went down to his left to turn away Kineton's spot kick.

On 25 minutes though Moss was given no chance by Jordan Watt's deflected strike from outside the area.

Burton failed to make the most of their numerical advantage, shots from long distance by Smith, Coles and Jamie Payne all saved by Moss.

For Bourne Craig Rook created space for himself but shot over.

Burton had an early chance in the second half with Smith narrowly wide with a free kick.

The game degenerated into a scrappy and fractious affair with few openings at either end.

The ten men almost won it late on when Rook's cross found substitute Tom Cardall whose shot was smothered by Burrows at the near post.