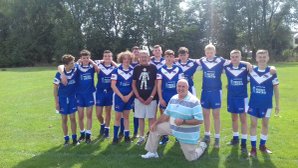 It was a tough start to the day for the U15s with 4 players dropping out on the morning of the game, leaving the team with only 10 players. After a talk from the coaches Sean and Danny the team headed out for the warm up.

It was nip and tuck in the early stages until a strong run from prop forward Charlie Hughes took the Broncos deep into the Cadishead half. With defenders hanging off him he was able to get a quick play the ball allowing hooker Charlie Roche to scoot over on the blindside to score in the left corner. The tough conversion was missed by Anthony Jenkinson but the early score provided the team with a confidence boost. The next try began with a strong run from the kick off, winger Edd Johnson catching the kick and almost making it to the half way line. Then from Charlie Roche the ball was passed along the line to find Dan Rothwell who fed it back inside for Ryan Kaye to race 30 metres and score under the posts, finishing an outstanding team try. After the fast Broncos start the Rhinos side seems low on confidence and the Broncos took advantage with 4 more tries through Clifford Howard (2) and Ryan Kaye (2), with 3 of them being converted by Jenkinson for a half time lead of 0-32.

Cadishead started the 2nd half strongly, putting the Broncos under pressure for the first 10 minutes and scoring an unconverted try in the corner after some good handling. The Broncos then dug deep to see off the spirited Cadishead fightback with some fantastic defending from Ryan Mukoka, Edward Ainsworth and Dan Rothwell with Charlie Hughes colossal in the middle. Bury had weathered the storm and took full advantage as Cadishead began to tire, the Broncos scoring 6 more through Anthony Jenkinson (2), Edd Johnson, Cian Kenny and Clifford Howard with Jenkinson converting all 6 for the final score of 4-68.

Well done to all the players today who put in an outstanding performance with only 10 men and to Cadishead who fought valiantly until the final whistle.