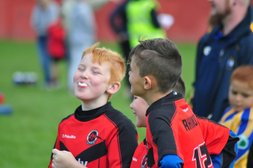 The Rhinos welcomed Crosfield Cobra’s to The Rec for the first game back for since the summer break, the atmosphere was brilliant with 4 other age groups all playing on Sunday morning so there was plenty of spectators for the 9’s to entertain and they certainly didn’t disappoint.

Mason who was the Crossfields captain for the day won the coin toss and opted to attack first which gave the Rhinos the opportunity to put in some big hits to show them they meant business, it certainly did something as the ball ended up getting turned over just in front of the try line. The Rhinos then took the charge through Anni Eckersley and Jack Kelly and made it back to the halfway line before having to turn over.

After the first couple of sets both teams really started to show their worth with Crossfields powering over the line and the Rhinos responding through brilliant runs from Dylan Stanway. Sam Burrows was given the position of dummy half for the first half and he certainly stood out using his organisational skills to get the ball to the best placed player, this worked numerous times with Asa Pollock, Tom Cussons and Ben Appleby running on to Sam’s passes making it harder for the Cobra’s to stop them.

The second half started just as powerfully as the first with both teams shutting each other out, the Rhino’s made numerous interchanges to get players involved and this seemed to affect the Cobra’s concentration which helped Billy Ward and Thomas Upton make some great runs towards the line before being held up. Jamie Valentine was once again brilliant on the wing providing support for his team mates and helping drive the Rhinos forward.

Throughout the game the Rhinos worked together brilliantly with Bethany Faulkner, Billy English and Rhys Elliott getting the opportunity to run with the ball, Matthew O’hara seemed to relish to opportunity to get a run out whilst Sam was playing Dummy Half.
With the training sessions over the summer emphasizing team work it seemed to really shine through this weekend with everyone helping and encouraging each other, none more so than Harvey Williams scoring a try in the corner which came about from a number of offloads from Jack and Anni.