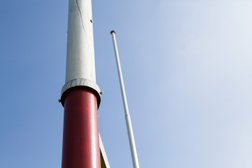 The Rhinos welcomed the Mayfield Mustangs for an early start at The Rec. Unfortunately, the Rhinos were defeated but plenty of effort was made by the team.

It was slow start from the Rhinos with the Mustangs running in two quick trys, but the team came back and got moving with a good strong run from Tom Upton moving up the pitch. Runs from Dylan Stanway and Jamie Valentine couldn't break a very organised defence. The Mustangs were on the attack again but the Rhinos defence was strong which kept them off the line with some strong tackling from Tom Cussons, Billy Ward and Jack Kelly. The Rhinos then moved down the pitch with a trade mark strong run from Captain Anni Eckersley when she went over the line to get home sides first try of the match.

The Mustangs kept coming but with a few second half changes we saw Asa Pollock, Bethany Faulkner, Matthew O'Hara, Jasmine Heaton Stoll and Rhys Elliot come on for the Rhinos. Asa made an instant impact through one of his zig zag runs trying to break the line.

Sam Burrows was getting the ball moving quickly from Dummy Half with a great pass to Dylan who went on to score his first try of the match. Billy English made a great run from left to right which almost set up Bethany for a try in the corner but unfortunately, the Mustangs stopped her in her tracks. Taking confidence from her near miss, Bethany made a superb try saving tackle.

New player Sam Brannan made a great run to get the Rhinos back on the attack which saw Dylan score his second try of the day. With more strong runs from Ben Appleby up the middle of the pitch Cadishead finished strong .