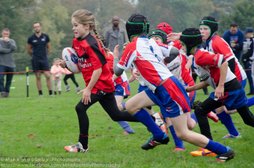 Two in a row for the Rhinos

Two in a row for the Rhinos

The Rhino's headed to Bury Bronco's for this week game. The Rhino's were ready for the game as soon as they arrived after still being on a high after their win the previous week. They knew that they had strong competition in the shape of the Bronco's and the game started really well with both sides fighting for control but the Rhino's seemed to have that edge and worked well as a team to take control with the first try thanks to some great work from dummy half Sam Burrows.

Jack Kelly was on fire breaking through the Bronco's ranks time an time again providing stunning off loads to Anni Eckersley and Dylan Stanway who both were multiple try scorers. When the Bronco's were on the attack they were proving to be worthy opponents for the Rhinos the tackles were thick and fast with Billy Ward, Matthew O'Hara and Bethany Faulkner risking their bodies to prevent the Bronco's taking the lead.

The second half started really well for the Bronco's with them getting a few past a Rhinos team that was starting to tire but the injection of a few new players they were soon back to working as a great team with Harvey Williams with a couple of great runs down the wing and Jamie Valentine getting so close again to that first try! Tom Cussons and Ben Appleby continued their great run of form with some amazing stops to prevent the Bronco's getting into Rhino territory. Sam Brannan was another Rhino who shined through the whole game an his efforts were rewarded with a great try.

The Rhinos have now made it 2 from 2 and this was a well deserved team win.