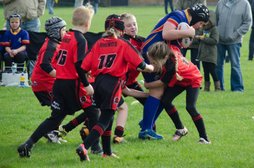 Rhinos edged out in epic battle

Rhinos defence has game of the season

The Rhinos took on a Newton Storm side who beat The Rhinos 10-1 when they met at the north wales festival a few months back.
This had the makings of an excellent game with The Rhinos full of confidence after 2 wins on the bounce and looking for revenge. The game certainly didn't disappoint.
The game started with both teams smashing into each other with both defence holding firm. Big tackles from Billy Ward, Matthew Jones and Anni Eckersley halted The Storm on the line. With both defences working extra hard Storm found a gap and raced from half way to get the opening score. Straight from the kick off Anni put a step on the waiting defence and offloaded to Billy who scored in the corner.
Both defences were now starting to tire and Storm were first to take advange passing the ball wide and getting in the corner. This didn't knock The Rhinos. Jack Kelly's strong running and Jasmins dummy runs were starting to cause problems in the storm defence. Anni took full advantage sprinting right up the middle and over the line to score. All the hard work in defence took its toll in the last 5 mins with Storm running in 3 unanswered points

The 2nd half was possibly the best display of the season from The Rhinos. Straight from the kick off Dylan Stanway received a pass from Sam Burrows and out ran the defence to score. The rest of the 2nd half saw The Storm big lads ripping into The Rhinos line and The Rhinos going straight back at them. The storms defence returned the favour halting several strong runs from Harvey Williams and Tom Upton. With only a couple of points in the game The Rhinos were bombarding The Storm line looking for the win. Unfortunately the line held firm. With only a few minutes left The Stom managed to sneak a try out wide breaking Rhinos hearts. Not one to be put down Asa Pollock had once last attempt at glory taking on the whole storm defence before being held up on the line just as the final whistle went.

The 2nd half was awesome for both teams. For a 9s game to finish 1-1 in the 2nd half is something to be very proud of. Every player who put on a shirt today puttheir body on the line and got involved in defence.