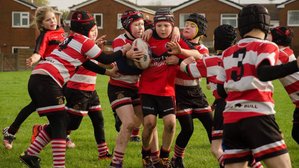 The Rhinos went into the final game of the season looking for revenge. Our first game as a league team was against away at Folly Lane back in March, Now it was their turn to visit The Rec.

The game started in barnstorming fashion with both defences holding out runners. Billy Ward, Anni Eckersley and Jasmine Heaton-Stoll all making some big tackles. It took a long sweeping move out wide from Folly to break the deadlock. The runner outpacing The Rhinos defence to score in the corner. Straight from the resulting kick off Jack Kelly took one of his trademark runs right at the heart of the Folly defence, taking 4 defenders with him. This created space for Billy who was caught just short of the try line. Sam Burrows then sent Anni right up the middle with a pin point pass. She smashed into the waiting pack and took them all over the line with her to score The Rhinos first try of the game. Folly then hit a purple patch and scored 4 quick fire tries. All of which were well worked and almost halted by The Rhinos defence.

The second half started exactly the same as the first only this time it was The Rhinos who scored first. Sam Brannan set off on a looping run out wide and found a pass to Anni who went over to big cheers from the crowd. Sensing a comeback The Rhinos defensive line looked mean, Determined to hold Folly out and get the ball back. Big hits from Bethany Faulkner and Jack turned the ball over several times but The Rhinos attack couldn’t find a gap despite the excellent passing and cheeky offloads. All the effort to get back into the game was starting to take its toll. With The Rhinos defence starting to tire Folly were finding gaps. They went on to keep The Rhinos scoreless for the rest of the game and scoring 6 tries of their own.

Despite the result The Rhinos should be very proud of the attitude they’ve shown in this game. The second half showed how far the team has come since that cold day at Folly back in march. The team has doubled in size both on and off the pitch and has turned into a team of mates rather than individuals.
Results haven’t always gone our way but we’ve all learned a hell of a lot and we are much better for it. We’ve never given up not matter what’s happened in the game and we’ve had a lot of fun. Weve also not missed a single game be it home or away which shows how much all the kids love Rugby League.
Thank you to everyone that’s been involved in getting us through the season. We look forward to seeing you all next year for Under 10’s.