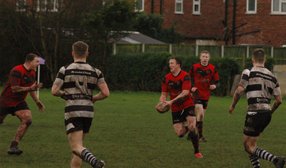 Pat on the back for Rhinos

The game started with some big hits and strong tackles from both sides but with man of the match Ben Connor and Tom Hayman making good yards the Rhinos started to take control.

On 10 minutes their early dominance paid off when Tom Connor hit Nathan Vernon with a clever pace close to the line for the opening try which Alex Speakman converted to put the Rhinos 6-0 ahead.

The Rhinos controlled much of the play for the rest of the first half but St Pats managed to hold out until half time.

Cadishead started the second half with a strong wind behind them and it paid dividends on 50 minutes when Vaughn Murphy kicked the ball down field and Alex Speakman won the race to touchdown for a try he then converted to stretch the Rhinos lead to 12-0.

St Pats then had their best spell as the Rhinos conceded back to back penalties on their own line and the visitors shipped the ball out wide to score in the corner.

The Rhinos steadied the ship on 70 minutes when skipper Brad White found Callum Mack out wide with a long pass on the sixth tackle and the winger showed great foot work to side step the defence and touch down. White then added the conversion to put the Rhinos 18-10 ahead.

A late try from St Pats set up a tense finish but the Rhinos held out to record a win against the division 2 side.