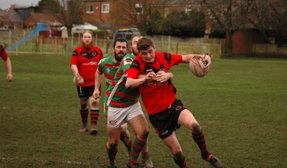 Rhinos hang on in win over Roose

A week after their cup meeting the Rhinos were victorious once again over the visiting Pioneers.

The Rhinos took the lead after 13 minutes when Josh Grundy pounced on a Brad White kick to score.

5 minutes later Roose hit back with an unconverted try to level the scores at 4 all.

The Rhinos were working hard with man of the match Keiron Reed and Ben Connor making good yards before a try from Nathan Vernon converted by Brad White regained the lead.

Defences were on top and there were no further tries before the break leaving the half time score at 10-4.

A minute in to the second half some great skills from Brad White saw him collect his own chip kick before kicking cross field for Vaughn Murphy to collect and touch down.

A 60 metre Brad White interception try converted by Josh Grundy then stretched the Rhinos lead to 20-4.

The Rhinos were looking comfortable and in control however 2 late tries put the visitors just 4 points behind and set up a nervous last 4 minutes. Thankfully the Rhinos defence held firm as they hung on to see out the win.