The Birth of the Blues by Ernie Wall

The story of the club began of course before 1958 and a great debt is owed to Inverleith Hockey Club. Inverleith during the 1950's was becoming too big (I should know, I was the match secreatary!) and a number of players including players such as Bill Boal and Peter Bruce, who were still playing during the silver jubilee of the club, thought that there was room for another club in Edinburgh. (Click here to see the notice sent to civil service employees). Eventually Broughton F.P. (Now Waverley Inveresk) and Edinburgh Civil Service were formed through the good offices of Inverleith at about the same time as each other.

Prior to all this though, the club was lucky enough to obtain a pitch at Muirhouse and keeping my ear to the ground around around 1954-1955 I heard about the possibility of a Civil Service Sports Complex in Edinburgh. After a great deal of in-fighting to establish the fact that men's hockey should be played at all, I joined the organising committee in 1956 as Men's Hockey representative; there was also, of course, a women's hockey representative still playing as civil service today. At that time the plans only showed one pitch for hockey and already I had agreed to share it with the ladies. Fortunately the rugby representative showed little interest (neither too did the Scottish Rugby Union) and eventually I managed to persuade the committee to allocate the rugby pitch (behind the bowling green) for hockey. We thus got 2 hockey pitches at Muirhouse, this increased to three in the 1960's.

The original intention was to open in 1959 at Muirhouse but (and this was a mistake) the ground was opened for football, hockey etc in 1958. As the grass was new there was no turf as such and this proved to be (in a bad winter) too early to start. To enable the club to get off the ground, apart from the constitutional formalities, Tommy Thomson (by then my successor as match secretary at Inverleith hockey club) obtained fixtures to make a start in September 1958. The first A.G.M. was held in March 1958 in St. Andrew's House and was chaired by myself.

The first fixture, not un-naturally, was played on 6th Septemver 1958 against Inverleith Nomads at Redford Barracks, then Inverleith's home ground. I opted that day to play in the Nomads team rather than the Inverleith 1st XI so that I could be part of the historic day. Both Tommy and myself continued to play for Inverleith (myself until 1960) and Tommy until a few years later.

We had no president in the first season of the club, but my old friend (and office colleague "boss") Kingsley Hancock, C.B.E. had helped me in the background to obtain assistance in various ways at St. Andrew's house. He started to appear on the touch line at Muirhouse whence Bill Boal "signed him on". He became the club's "mentor" until his untimely death in 1969 when I had the sad task of acting as chairman to a memorial dinner (for which incidentally he had left finance in his will - he was that kind of hockey fanatic).

I could almost write a book about the 1960's but I should mention before closing this epistle that the club colour's were adopted as blue and white when we "inherited", from my office, a set of unused football strips.

Players resplendant in their blue "hockey" strips. Opening of New Pavillion at Chiswick (28th May 1969) 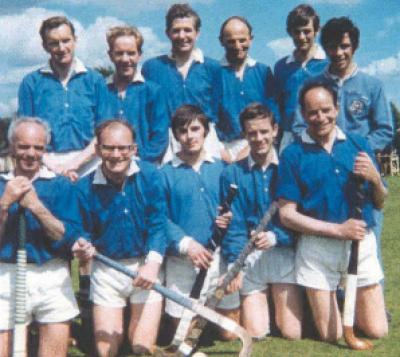